We purchased a Viking Saratoga Dual Disc tandem in November 2008.  Since getting it we have done about 150 miles on it.  Recently it started making a “clonking” noise from the front pedals/bottom bracket. I tightened up all the bolts I could see on the pedals, brakes and chain rings but it still made the noise.  We took it to a bike shop who had a look and said it may have been caused by the eccentric bottom bracket bolts coming loose (I didn’t see these when I did my initial tighting).

I checked the bolts and they were loose.  I tightened up the first bolt succesfully using a small allen key. When I went to tighten the other bolt the head of the bolt sheared off. I emailed Parkers of Bolton and they have given me a number to ring for advice on removing the broken bolt stub.

I am presuming I am going to have to drill into the broken bolt and try to use an ezout or else try a left handed drill bit. Other online advice seems to involve welding or heating neither of which I have kit to do.

I have managed to make a bad situation worse.  Bought a draper screw extracter kit and a tap wrench.  Drilled a hole in the top of the bolt and gently turned the tap wrench, which promptly sheared off leaving a sheared bolt with an embedded tap wrench end in it.  Looks like I may have written off the tandem.  Really frustrating as this wouldn’t have happened if slightly better quality bolts were used.  I guess its true that you get what you pay for.  I am going to post on some forums to see if anyone has any suggestions on what to do.  Any ideas are welcome.  Might look at the cost of getting a proffesional to drill out the whole thing and fit a new threaded sleave.  Bugger, bugger bugger!!!

Here is a picture of the current mess after tapping, drilling and eazyout breaking. I have started a thread over at The Tandem Club as well to get peoples advice on what to do next

** Update 27/03/2009 **
I have been in contact with Parkers of Bolton whom I purchased the bike off(via ebay). A guy called Andy has been very helpful. His advice was to try and get the bolt out using the methods I have tried. He did say he hasn’t had this problem before (but has had the reverse case where a customer had their bolts fall out)

He has said that the bottom brackets of these tandems has changed over time and they didn’t originally have the bolts at all. I may be able to get rid of the original clonking by tightening up the bottom bracket itself and just using the one ok bolt and leaving the sheared stub in place.

He is sending me the tools for getting the bottom bracked out. When I get them I will:

1. See if there is any play that can be tightened up in the bottom bracket itself. If this removes the original clonking then I will leave it at that. Otherwise I will go to step 2.

2. Try to remove bottom bracket, then retry to free the sheared stub. Failing removal I will see how much it costs to get the stub drilled out or to get a new hole drilled and threaded.

I will let you know how I get on. Cheers. 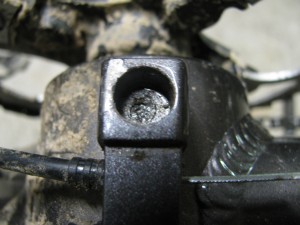